First world industry meets old world gods, and they’re not happy. An interesting ‘what if’ tale.

The Kanawha Anomaly is an intriguing military tech thriller with a touch of Native spiritualism sprinkled in… a captivating tale that leaves you yearning for more.

In the Kanawha Anomaly, Phil Temples has managed to merge a fast-moving modern-day saga, quirky and interesting characters, and elements of spirituality into a novel that will pull you in and keep you reading. When strip mining in West Virginia seems to have unleashed an other-worldly power, the top-secret team Blue Avalon is called upon to investigate. What happens next may actually have consequences for the entire world. A not to be missed read, The Kanawha Anomaly combines old beliefs with new technology in a compelling book you won’t easily put down.

“Making his way carefully so as to not spill his coffee, the Air Force brigadier general walked around rows of electronic consoles until he arrived at the airman’s. He examined the screen. General Benson continued to stare at it in disbelief for a full five seconds.

“He punched in a command on the terminal that patched the display to the “Big Board.” Benson hit another button, causing a piercing, two-second dual-tone alert to sound, warning everyone in the amphitheater that a priority event was in progress.

“Everyone now had the same view as Benson and the airman: the board displayed a reddish-brown “hotspot” over central West Virginia—the unmistakable real-time signature of a thermal event observed by an early-warning satellite. Jaws dropped. The room, which moments earlier had been bustling with activity and chatter, suddenly became deathly silent.” 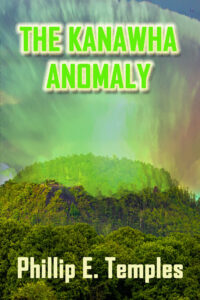 When employees of the Green Creek Coal Company detonate an explosion to strip-mine Kanawha Mountain, the blast triggers a series of unexplained-possibly super-natural-events in the rural hills of West Virginia. Blue Avalon, an elite team of civilian and U.S. military personnel formed to investigate unexplained phenomena, is activated to investigate whether an intelligent entity or force is respon-sible for “the Kanawha Anomaly.” The Blue Avalon team is assisted by three civilian consultants: Shawnee Native American tribal members Leon Great Eagle and Ben “Dancing Bear” Grayson; also, Sarah Muller, a young Georgetown graduate who has a special connection with the entity. The team must work against the clock to determine whether the Anomaly is benevolent or constitutes a direct threat to all of mankind.