Moonshine Cove Publishing has accepted for publication my manuscript, “The Kanawha Anomaly,” about an unexplained phenomenon that occurs in the Appalachian region of West Virginia.

No estimated publishing date yet, but if previous experience with my last two Moonshine Cove novels is any indication, it should probably be around May-June, 2021.

UPDATE: Moonshine Cove Publishing has given me an estimated publication date of August 21, 2021. 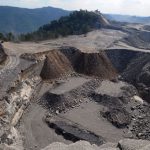 I received some excellent corrections and feedback from my beta readers on “The Kanawha Anomaly” manuscript and am now starting the process of submitting it to publishers. Wish me luck!

“When employees of the Green Creek Coal Company detonate an explosion to strip-mine Kanawha Mountain, the blast triggers a series of unexplained—possibly supernatural—events in the rural West Virginia hills. Blue Avalon, an elite team of civilian and U.S. military personnel formed to investigate Unidentified Flying Objects and other unexplained phenomena, is activated to investigate whether an intelligent entity or force is responsible “the Kanawha Anomaly.”

“The Blue Avalon team is assisted by three civilian consultants: Shawnee Native American tribal members Leon Great Eagle and Ben “Dancing Bear” Grayson; also, Sarah Muller, a young Georgetown graduate who has a special connection with the entity. The team must work against the clock to determine whether the Conundrum is benevolent or constitutes a direct threat to all of mankind.”

Kanawha is a county in West Virginia; also, Kanawha was a proposed name for the 39 counties which later became the main body of the U.S. state of West Virginia, formed on October 24, 1861. Finally, the Kanawha River flows through West Virginia. It’s said the river was named by the Native American Delaware tribe.

The story takes place in coal mining country in West Virginia, and has a strong First Nation theme.